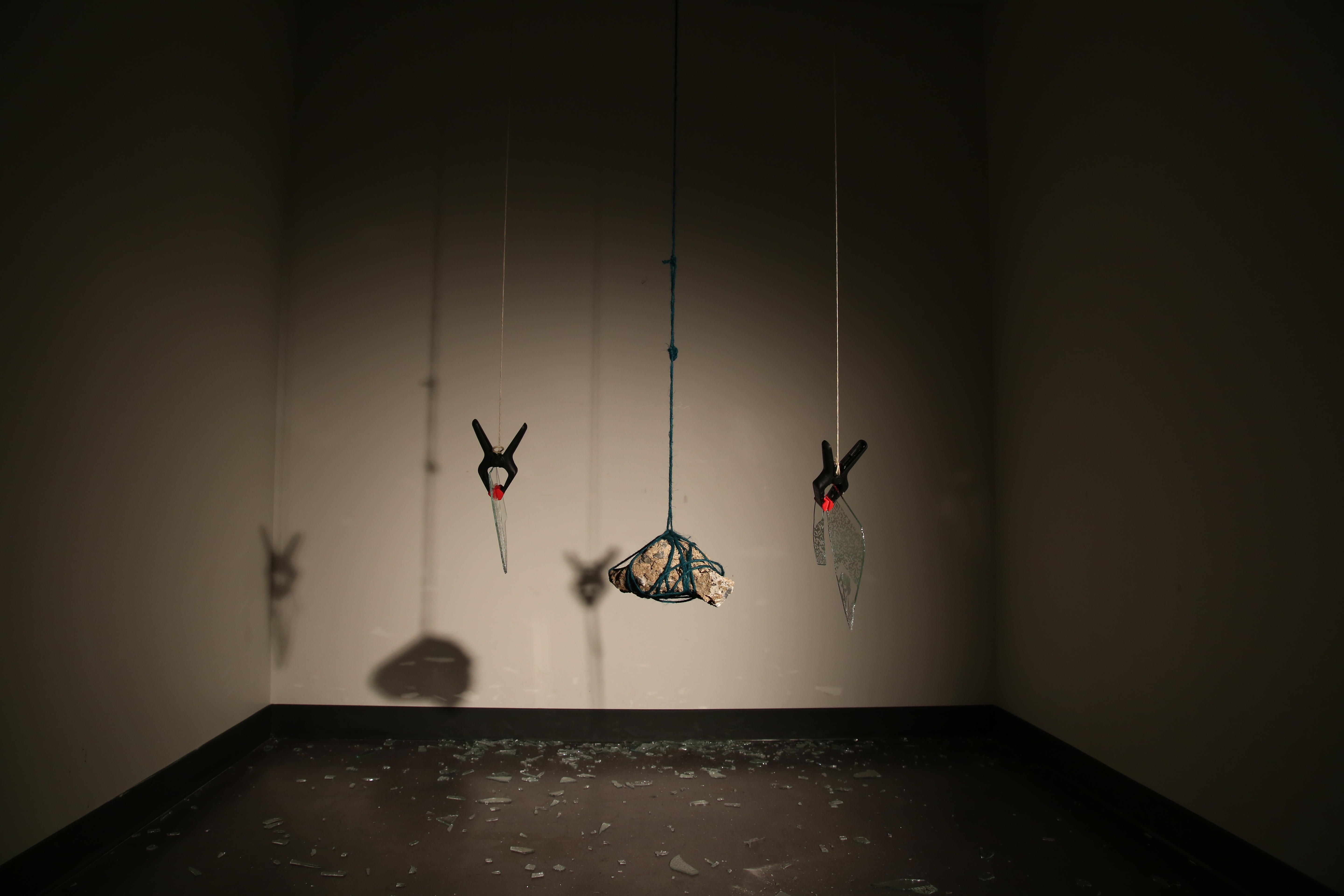 Our final for Uses of Discomfort revolves around the materiality of glass.

The sound of glass shattering is visceral and startling. It evokes disquieting associations: the tragic loss of a family heirloom; being menaced with the jagged end of a broken bottle; a rock thrown in hate through a storefront window; the chilling sound of home invasion. It also signifies tension and danger, followed by the shout that stops you at the kitchen threshold: “Don’t come in here! There’s broken glass!”

Glass is a material rich with symbolic meaning. The symbolism of shattered glass is perhaps most powerfully evoked by Kristallnacht, The Night of Broken Glass, during which the Nazis perpetrated systematic attacks on Jewish people and property.

We also drew inspiration from the idiom “people who live in glass houses shouldn’t throw stones”. The admonition to refrain from judging others lest we be judged ourselves draws a correlation between the materiality of glass (transparent frangible barriers separating inside from outside, self from other, private from public) and flaws in human nature.

And finally, this piece is about memory. Glass has a long history as an information storage medium. Prior to the advent of cellulose nitrate film, photographic emulsions were captured on glass plate negatives. Modern laptop hard drive platters are made from glass. Silicon, one of the elemental building blocks of silicate glass, is the substrate on which the ubiquitous microchip is fabricated.

Memories, like the little cubes of tempered safety glass, are but fragments of a former whole. A point of no return is as inherent to the material as it is to memory. Once broken, glass cannot be returned to its original state, and memory, be it precious or shameful, cannot actually restore a past event. Some memories are sharp and piercing, others are treasured and framed in glass. Memories must be preserved to keep from losing them, be it in the mind or with physical media, and concealed to keep them private, be it in a locked drawer or with encryption.

But like glass, so too encryption can be broken. This is true now more than ever as raw computational power grows exponentially, cryptanalysis becomes ever more sophisticated, and the companies with whom we trust our data become increasingly ethically questionable. We’re taught it’s foolhardy to share our data (though we do it just the same) and when no longer needed, it’s not enough to erase, we must shred the disks and smash the drives to be sure there’s nothing left to reassemble. 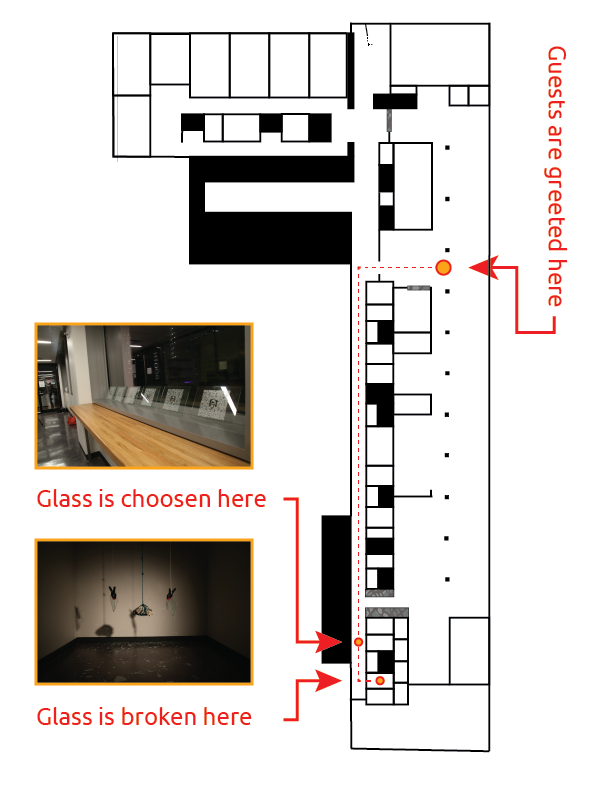 Ours was by design a small, intimate experience. Our participants were less an audience, more so guests.

Aaron and I made no broad attempt to recruit guests, posted no announcements to the student list. Instead, we each choose two individuals and asked them to join us. They were told nothing other than to meet us on the floor in the lounge at the designated time.

After collecting our guests, we walked as a group down the length of ITP’s exterior hall, only stopping at the furthest window sill counter, where we’d propped up six ⅛” thick 8.5”x11” glass plates. Each plate had been etched with a unique QR Code, three bearing Aaron’s image at their center, three bearing my image.

Our guests are asked to choose one plate each from the three. They wait while their host carries the first plate of glass chosen, ducks into a huddle room at the end of the hall, the interior of which is obscured from sight by a black curtain.

The host emerges, collects the first guest, asks them to please close their eyes and leads them by hand past the curtain into the room.

Eyes still closed, the quest is handed a pair of safety glasses and asked to put them on. Finally, their hands outstretched, they are handed a heavy irregularly shaped object.

The guest is then told they may open their eyes.

In their hands they are holding a jagged piece of concrete rubble, roughly the size of a melon. The rubble is tied to a green cord, the other end of which is fixed to a single point in the center of the ceiling.

In front of them, the glass pane they selected just moments ago hangs suspended a few feet off the ground by two thin pieces of string attached to the ceiling.

The guest is given no explicit instructions. A conversation may or may not ensue. Together, host and guest wait for the act to unfold.

For my final, it was a toss up between refining either my Inform sketch or my Twine sketch.

Aaron and I are proposing to build an installation that uses glass as a catalyst for discomfort.

The Artsy post written by Isaac Kaplan on Jordan Wolfson’s 2017 Whitney Biennial piece, Real Violence, felt like a bit of a tease. Not that it was written to...

There’s a line in something I wrote years ago: